What Are the Best Python Jobs to Pursue in 2021?

Saying that Python is on the rise is putting it mildly – especially when the results of Stack Overflow’s latest 2020 Developer Survey rank it as the third most preferred programming language amidst web developers.

And if that isn’t convincing enough, Python is set to take the lead in the TIOBE Index as the top programming language. Right now, it’s in third place. However, the gap between Python and the current reigning champion, C, is only 0.67%.

Moreover, Python is predicted to overtake all its competitors very soon – in just a few years, in fact. That, of course, is wonderful news for anyone who has Python in their toolbox…or is looking to add it. Not to mention that the job market demand is skyrocketing. So, it’s becoming more and more evident that Python is more than just a dilettante favorite – it’s what employers want.

In this article, we’ll share our insights about the best Python jobs to pursue in 2021 and how to land one. We’ve gathered and rummaged through data from over 1,000 U.S. available positions, originating from multiple job boards, to find out the current market trends for Python-related jobs in order to give you a good overview of what you can expect.

We’ll walk you through:

Python is associated with some of the highest paid jobs in the U.S. – some of them quoting a median salary of $120,000. And job seeker websites like Indeed.com and Glassdoor currently sport over 100,000 ads with Python as a skill requirement.

Things are similar in other parts of the world as well. 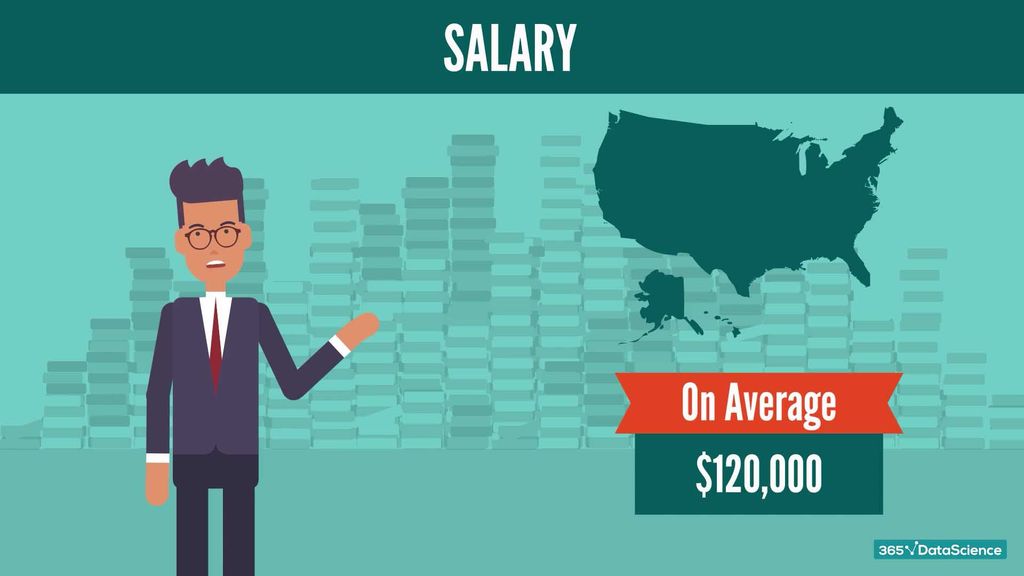 ITJobsWatch stats show there have been 15,022 permanent job ads citing Python posted in the UK in the last six months – that’s nearly 5 thousand more than the same period in 2020 – with a median annual salary of £65,000. Those are some impressive figures! 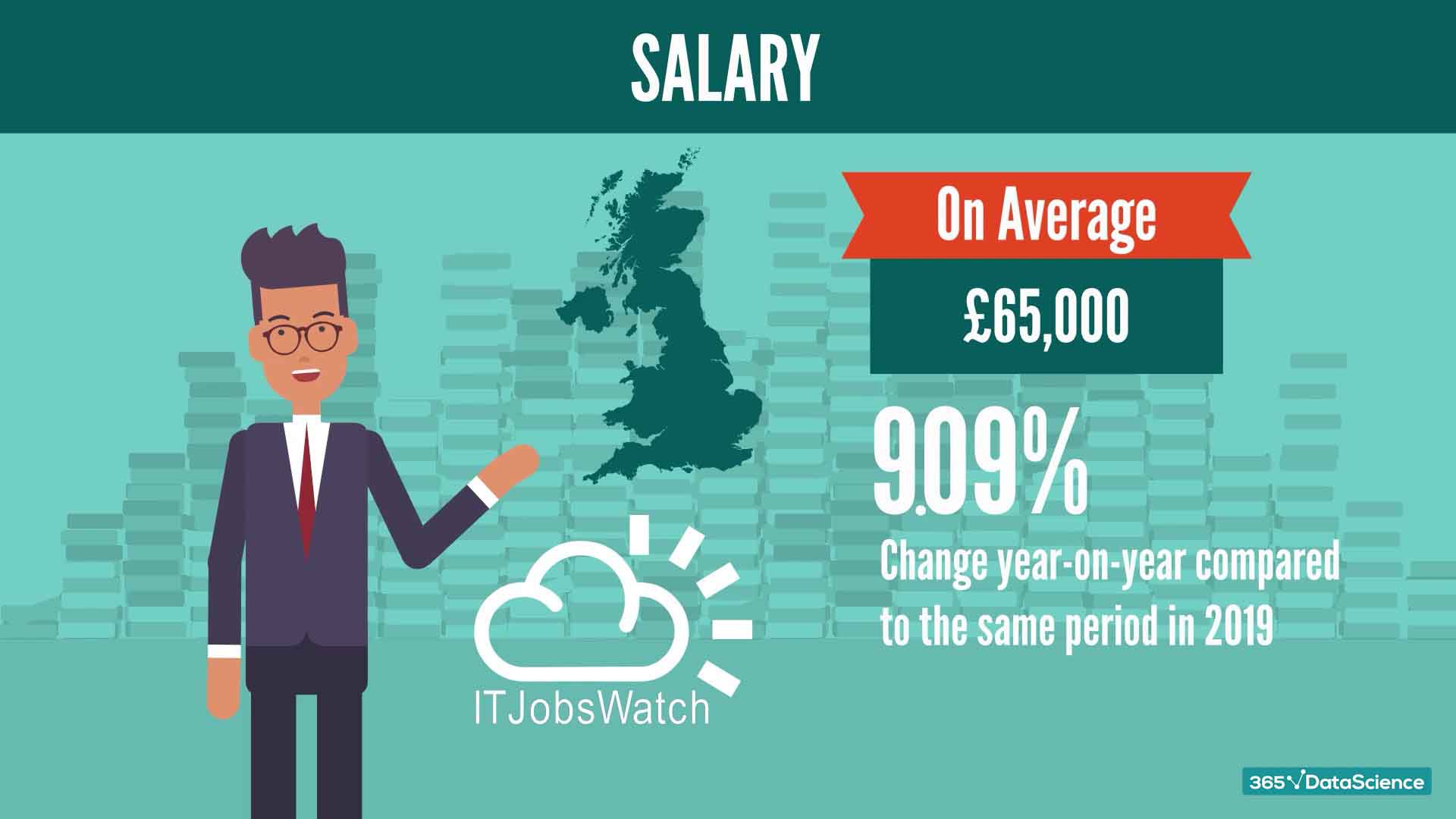 What Companies Have the Highest Number of Python Job Offers?

According to the data, Apple and IBM are leading the pack with the highest number of job offers, followed by other top industry giants, like Amazon and Facebook, who also make their mark with a good portion of job openings mentioning Python skills. 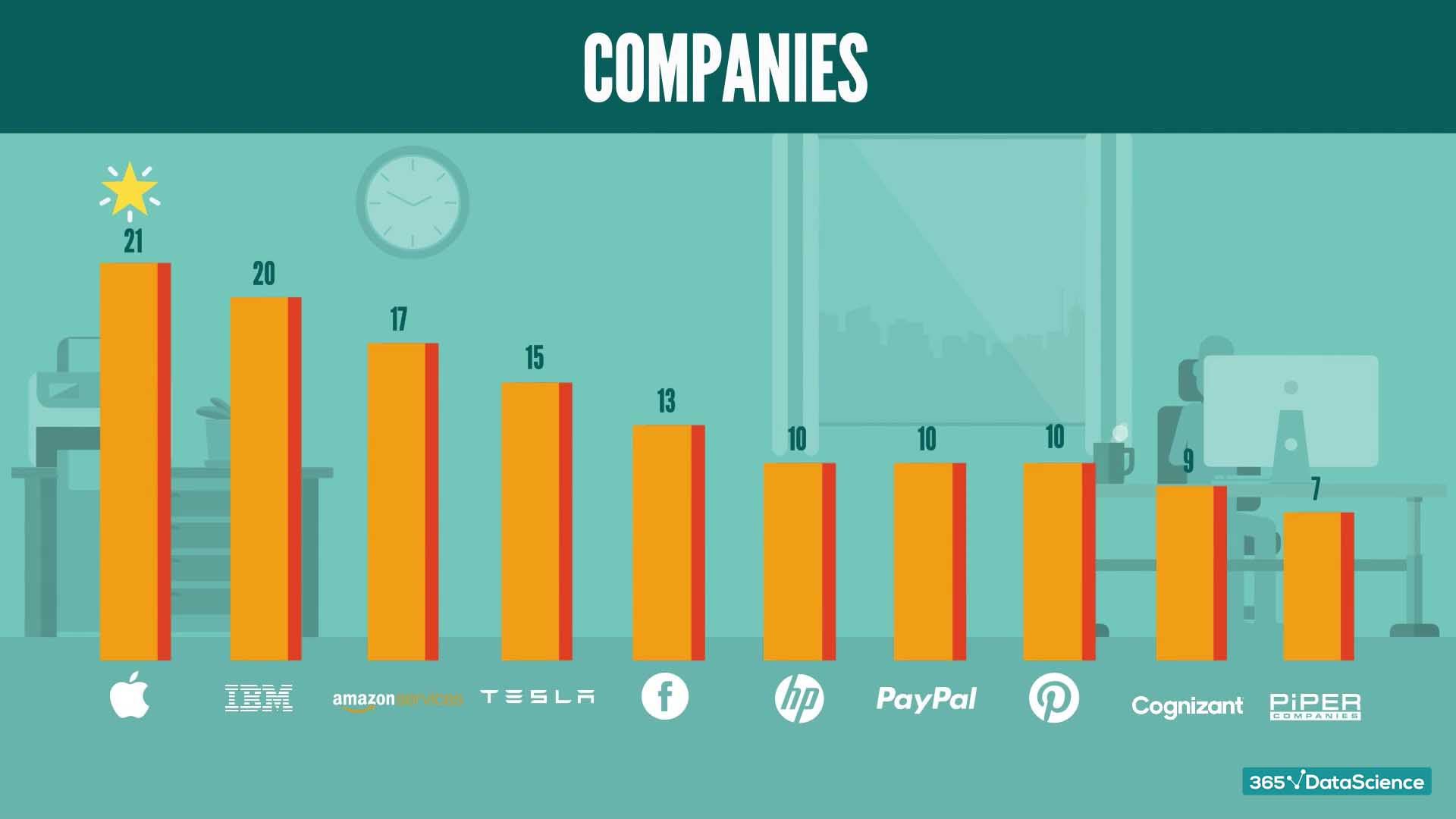 When it comes to company size, it’s obvious that most of the offers are posted by companies with more than 10,000 employees – this proves that big firms are actively recruiting Python-skilled candidates: 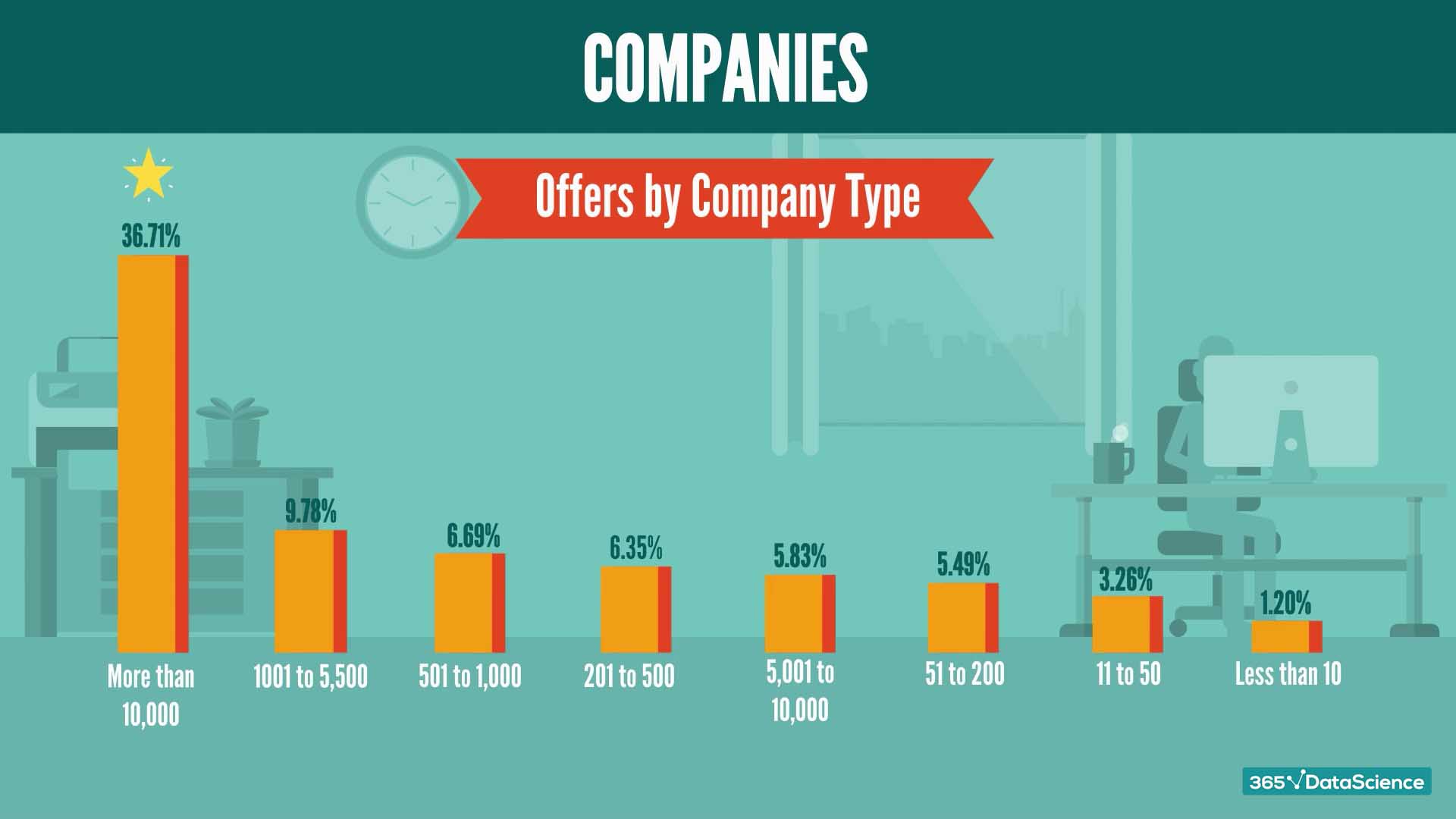 Nevertheless, there’s a reasonable number of offers from medium and small-scale companies as well. That’s definitely good news for job seekers across the board!

Naturally, our research shows that most of the offers are concentrated in the Information Technology industry.

However, this barely exhausts all possibilities – as you can see, there’s a considerable number of offers coming from the Financial Services and Education industries as well. 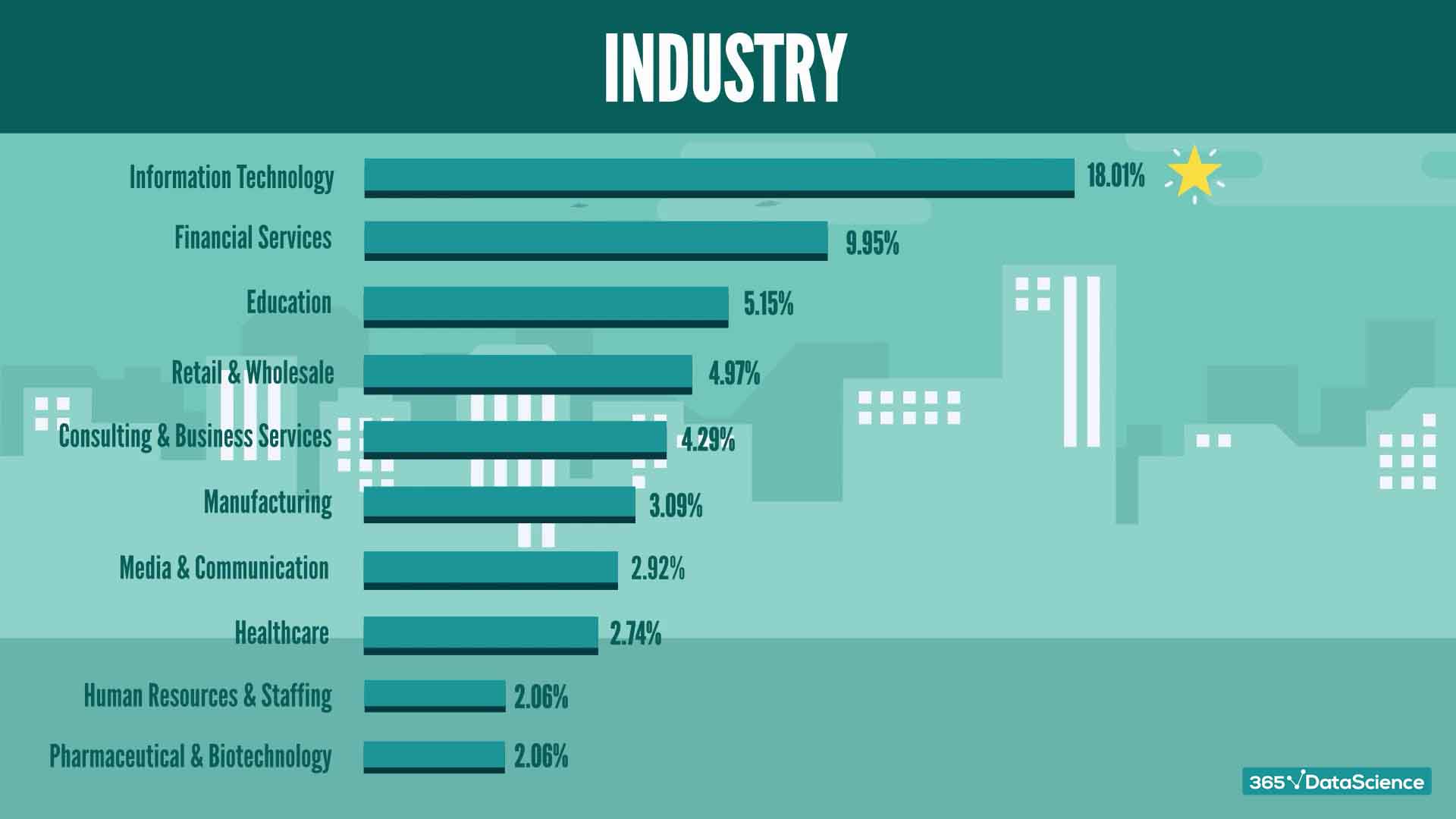 Which Are the States with the Highest Number of Python Jobs?

State-wise, California tops the list with a whopping 244 job posts. Compared to that, the state of New York is not much of a close second. However, it doesn’t fall behind by that much. It also boasts a high number of Python-related ads – 154, to be more specific. 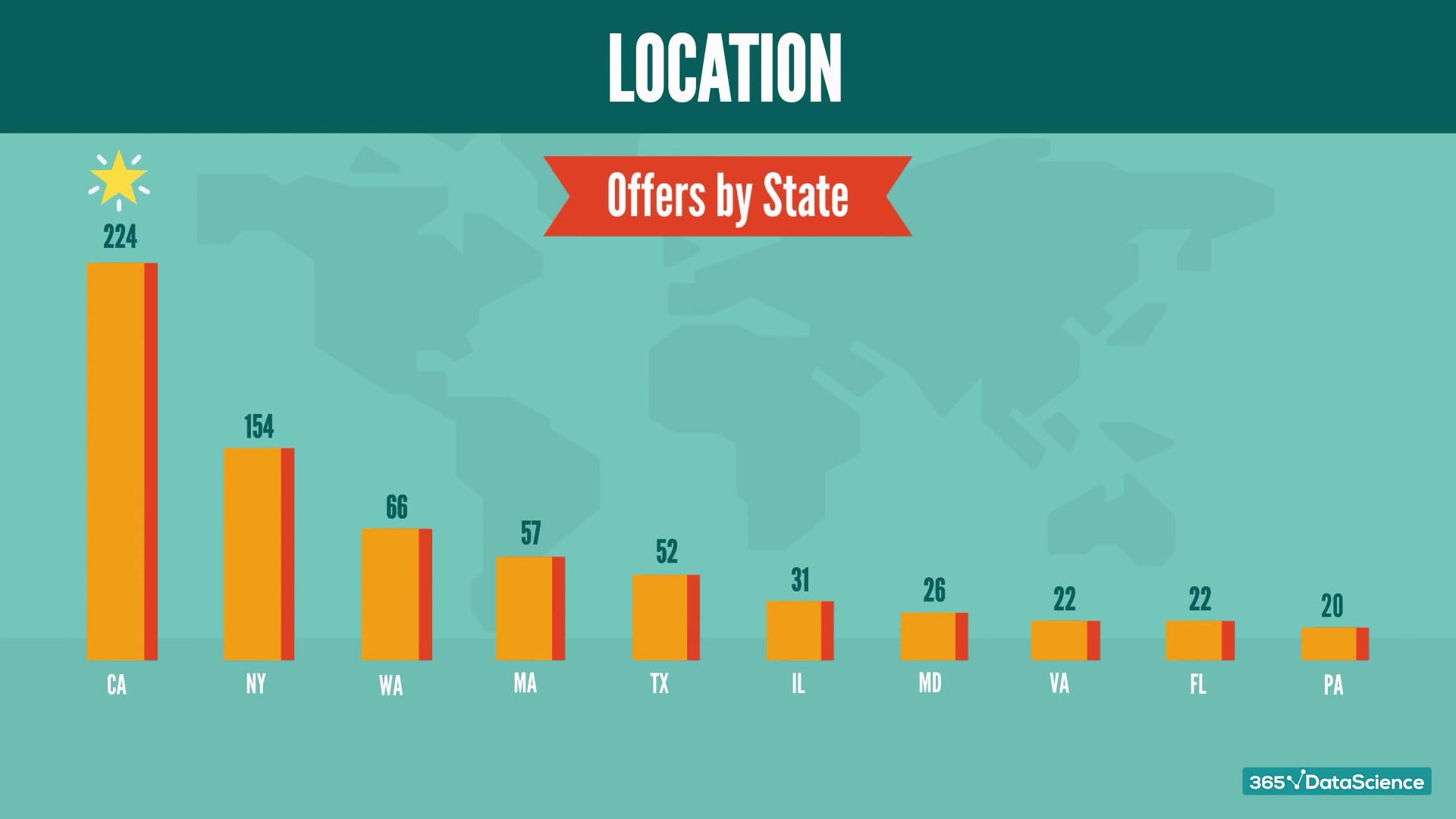 In fact, if we look at the data in terms of individual cities, New York City currently has the highest number of Python job offers: 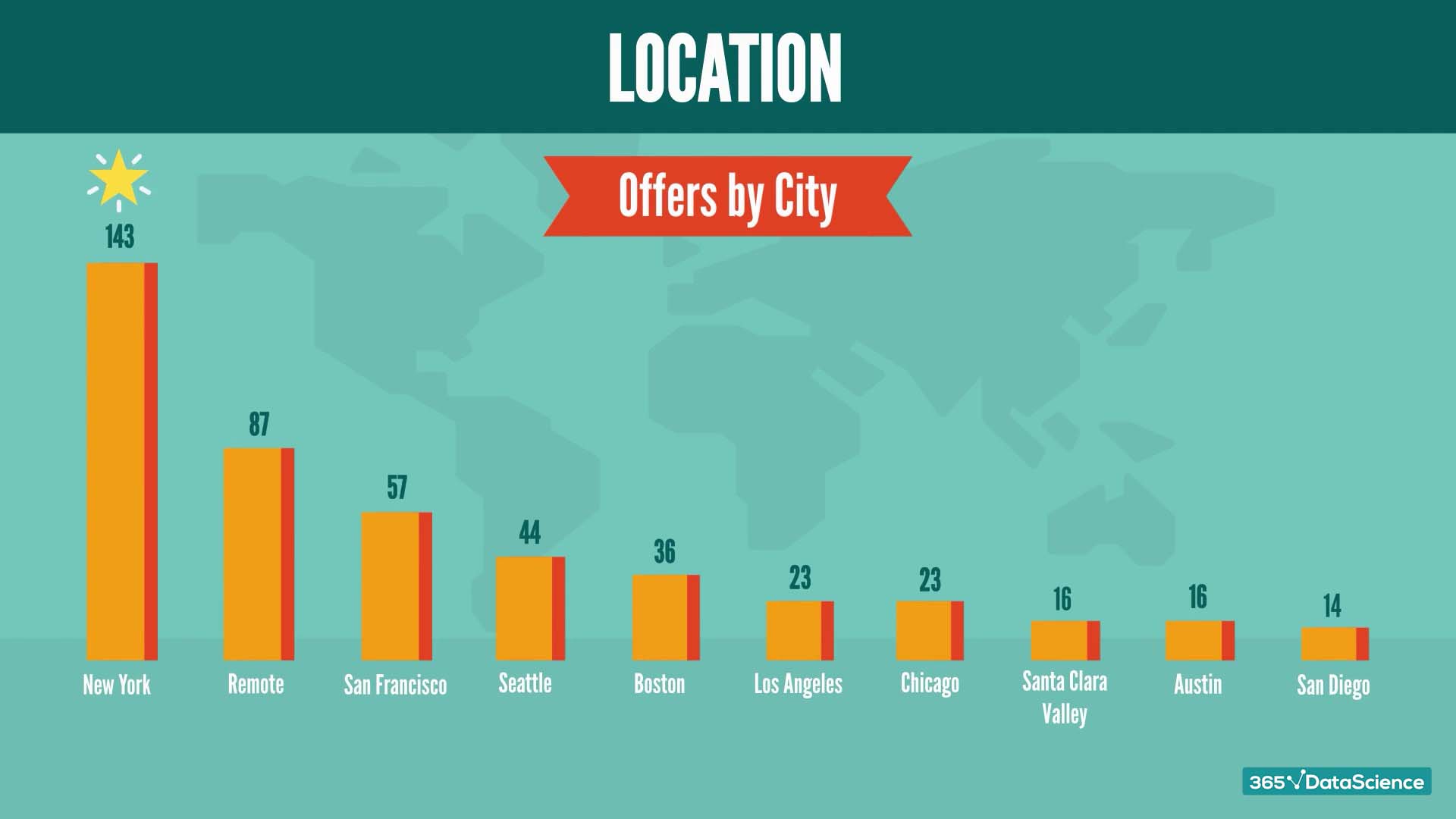 What’s also worth noting here is that there is a number of remote Python jobs that don’t mention any city or state. This could mainly be due to the current pandemic situation as most companies have their employees working from home. Still, as you can see, that doesn’t make location irrelevant in terms of the number of Python job openings.

What are the Most In-Demand Python Job Roles?

The highest number of Python programming jobs is for software engineer roles. People with this job title very often specialize in another programming language aside from Python – Java and Javascript are among the popular options.

The second type of role with the most Python coding jobs is data scientist. Unsurprising, as Python is the programming language of choice in the data science world.

A good portion of the jobs posted are for research roles in various fields. A decent number are also for Python developer jobs, as well as for positions such as data analysts, testers, quantitative engineers, and Machine Learning engineers. 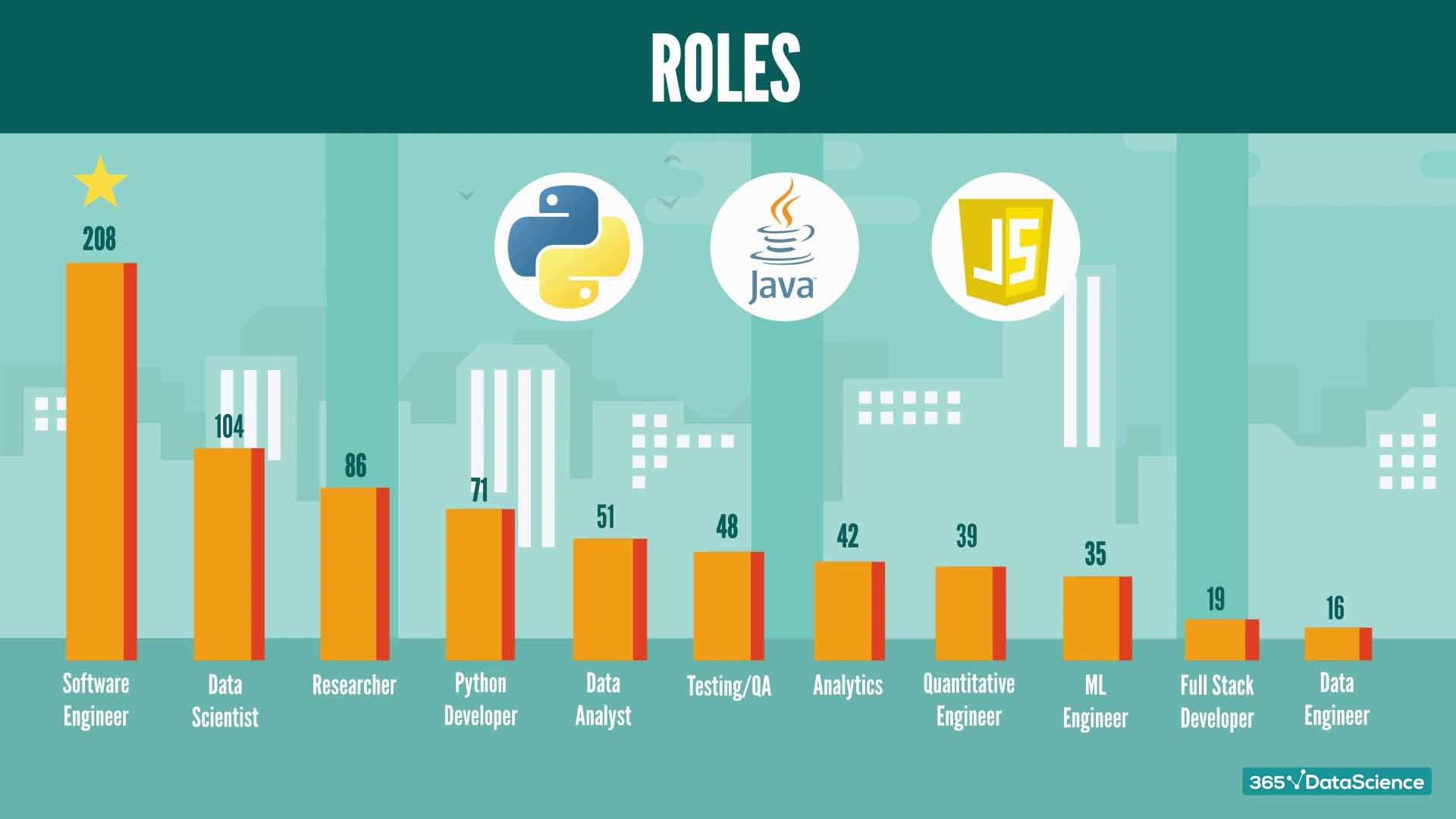 What Education Do You Need to Land Python Jobs?

What level of education are employers looking for in Python job candidates?

It would seem that a Bachelor’s degree would suffice for around half of the cases we’ve analyzed (entry level Python jobs and junior Python jobs): 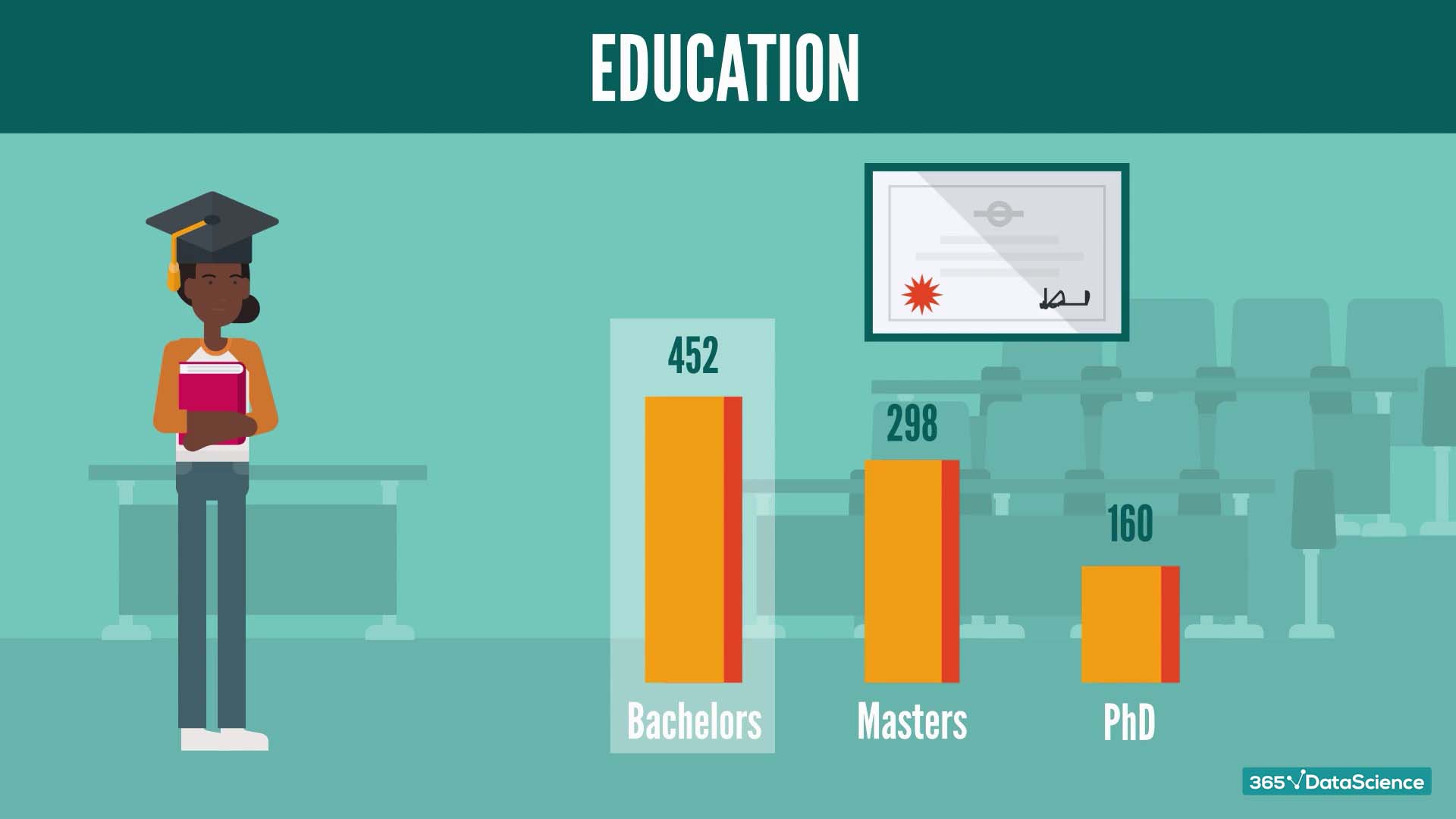 The other half, however, require a Master’s degree or a Ph.D. diploma.

As far as specialization goes, Computer Science has been mentioned 446 times, making it the most in-demand educational background in the majority of Python programmers’ jobs: 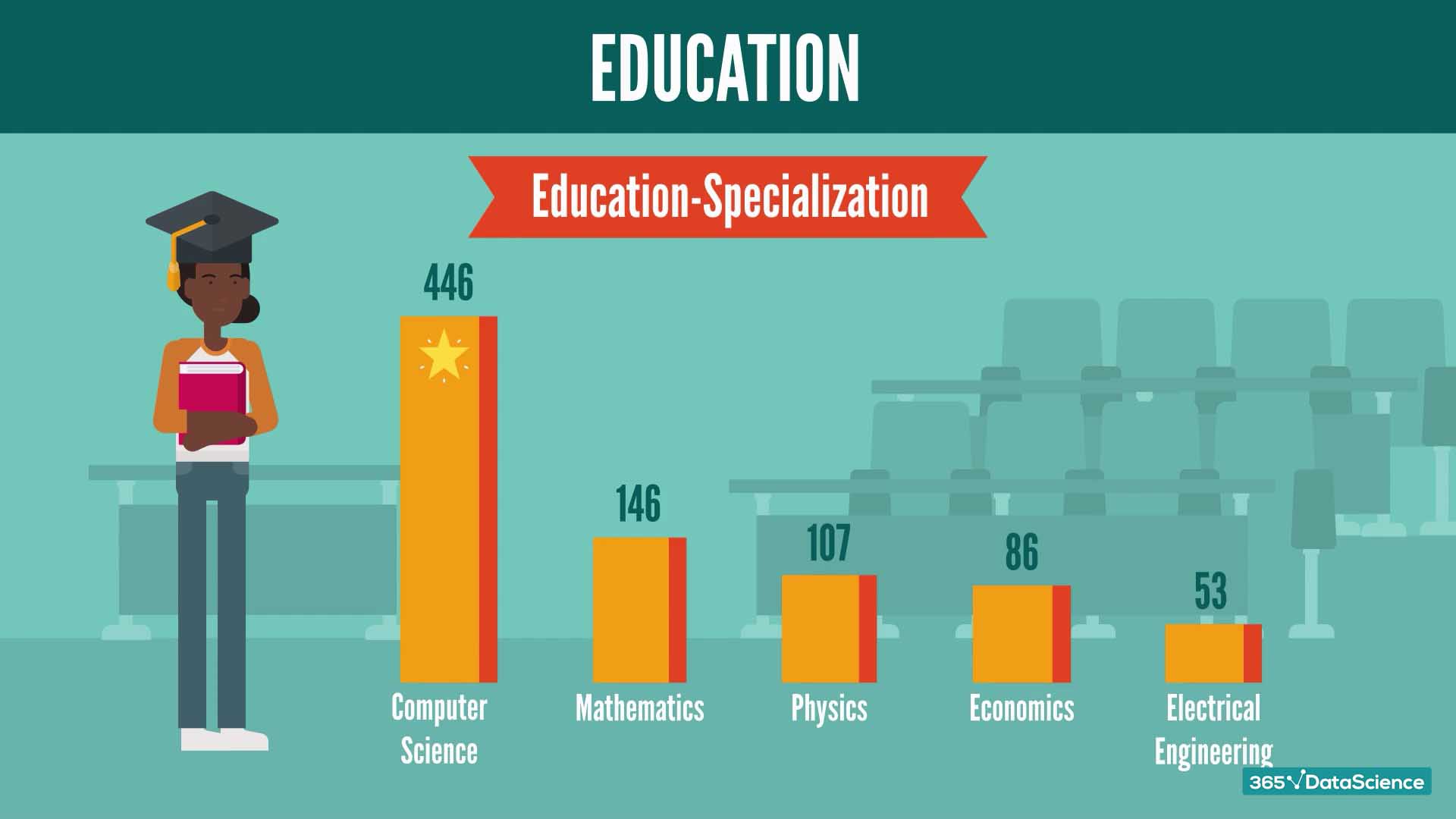 Additionally, we can observe that a relatively high numbers of Python jobs are citing Mathematics and Physics as a preferred educational background.

What Is the Necessary Experience for Python Jobs?

As you can see from our graph, most companies are looking for a candidate with at least 2-3 years of experience: 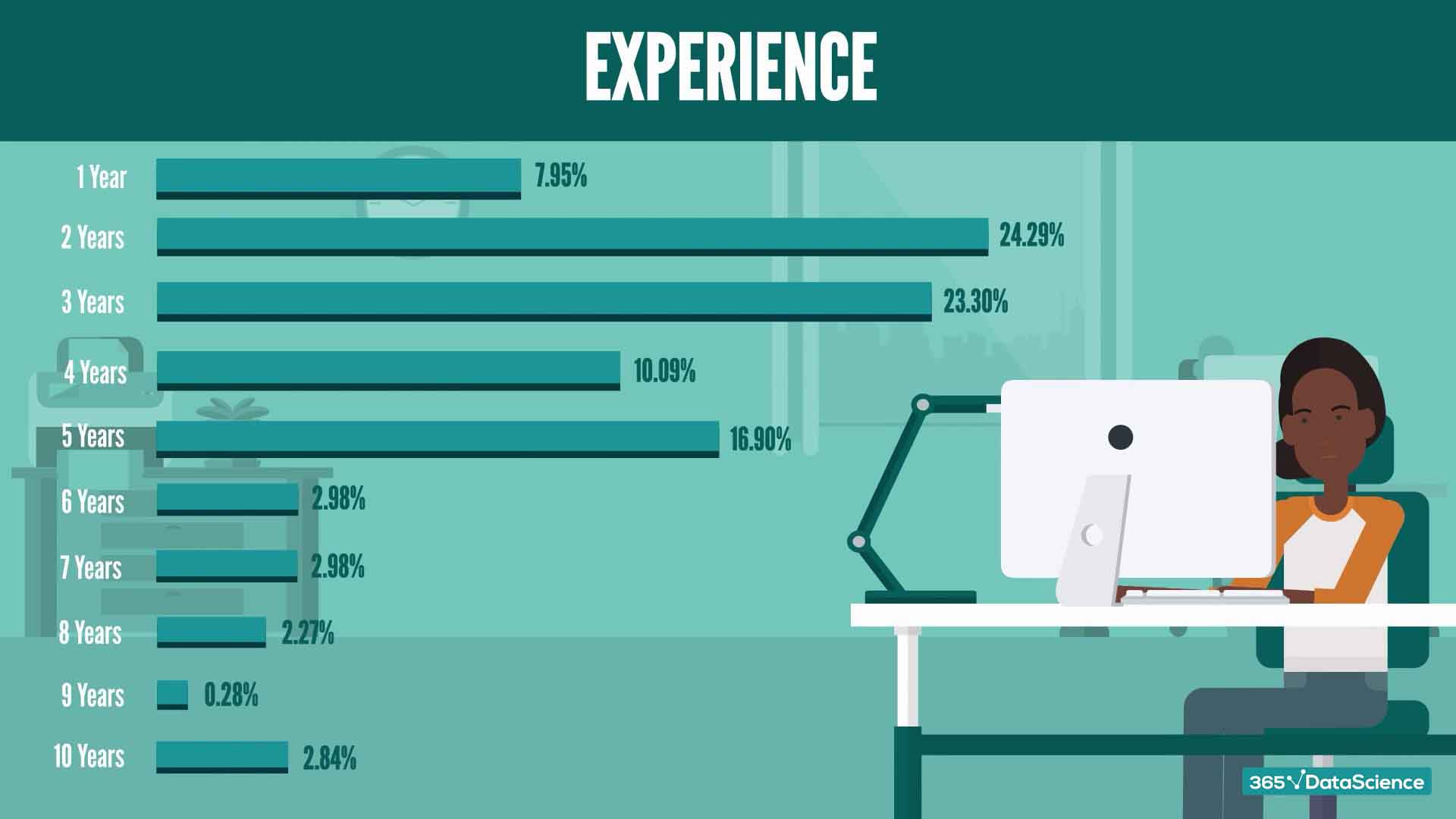 However, the greater part of the Python job offers in our sample is suitable for candidates with at least 5 years of experience. Keep that in mind and make sure you’re constantly upgrading your skillset by working on relevant tasks and projects in order to stay competitive.

Which Are the Required Skills for Python Jobs?

There are two types of skills you’re most likely to encounter in any kind of job description, not just Python-related ones – hard and soft skills. Hard skills, in our case, are the technical competencies you can put into practice. These include proficiency in programming languages, libraries and technologies, among others.

What Other Programming Languages Are Listed in Job Descriptions Along with Python?

Most often, employers are looking for people who know more than one programming language, even for Python entry level jobs.

You’ll notice in our graph that SQL is second on the list, right after Python. As a database query language, SQL proficiency is a must in jobs that use Python, in addition to programming language competence. 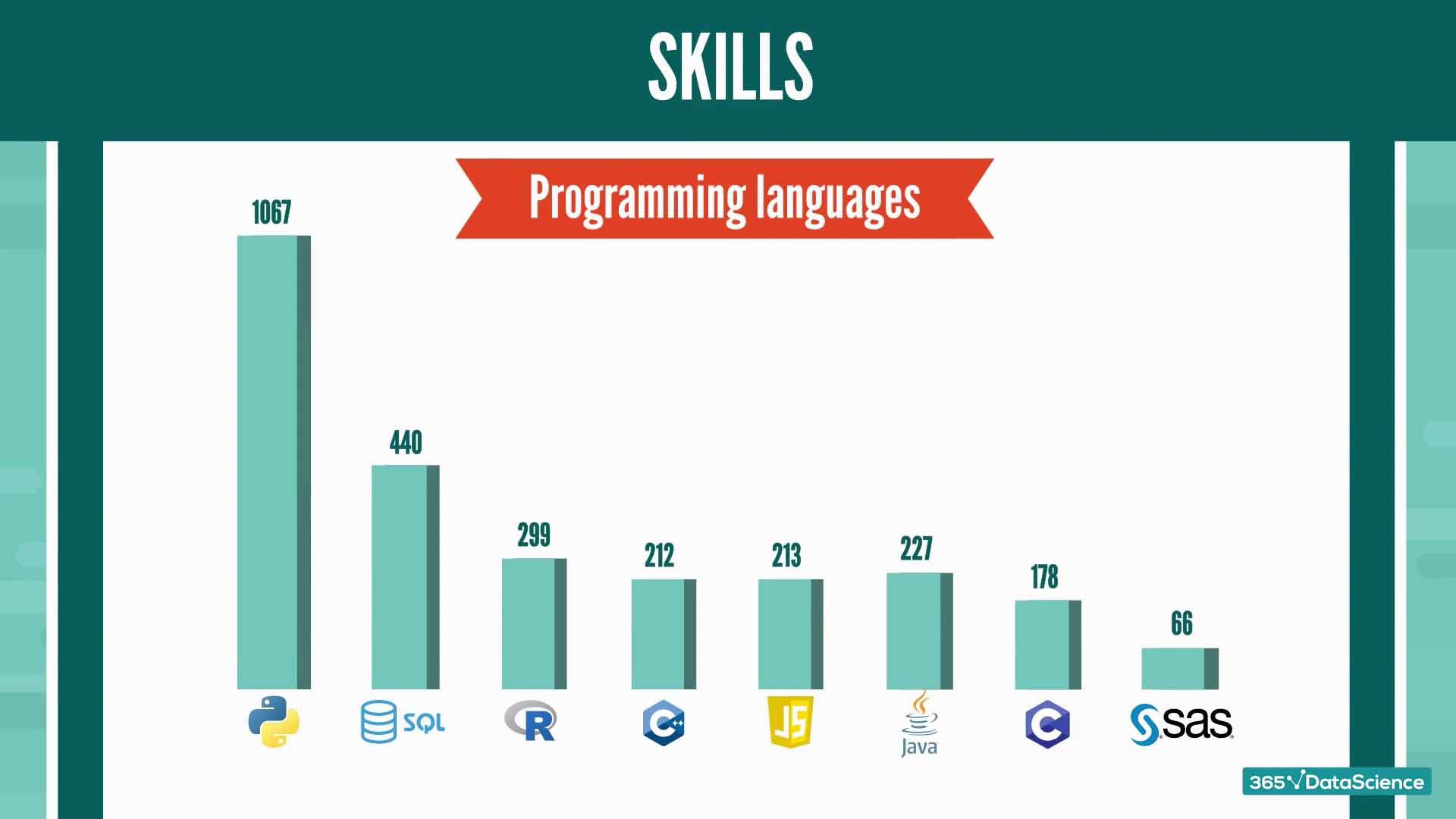 What are the Most In-Demand Python Libraries?

We can’t leave out the fact that, to a large extent, Python has become famous because of its many libraries.

Over the years, Pandas has become a favorite for data manipulation activities. Knowing this, it should come as no surprise that it ranked in 1st place in our sample analysis with the highest number of Python job ads: 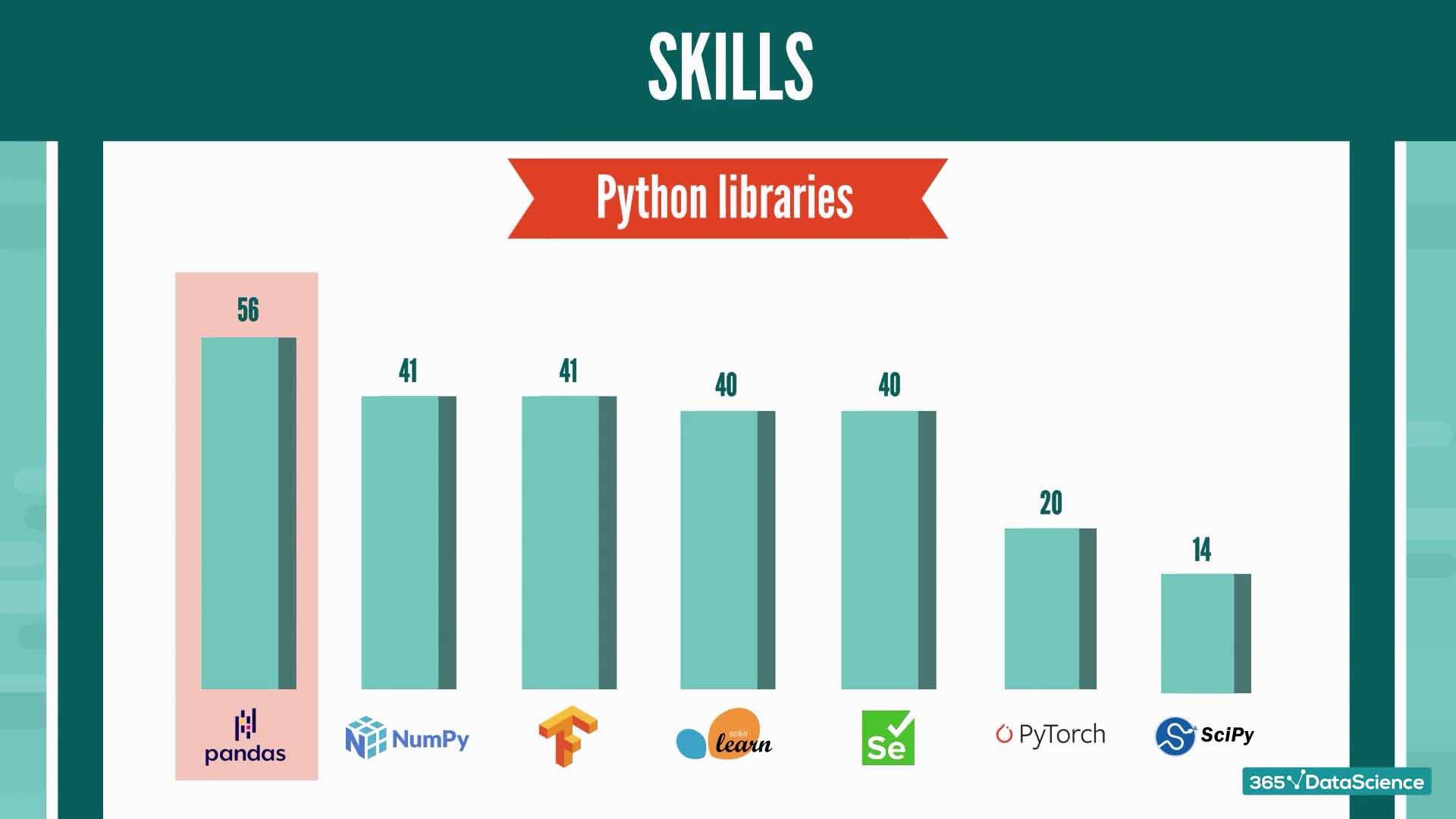 Nympy, Tensorflow, and Scikit Learn are the three other preferred libraries to head the list. They’re especially popular in the data science field.

Interestingly enough, Selenium is frequently mentioned as well – that’s mainly because there is a Python wrapper available for it, with application in Automation testing.

What Else Do You Need to Master to Apply for Python Jobs?

As we’ve already mentioned, sometimes it’s not enough to know just one programming language. Indeed, there is always something more to master when it comes to boosting your employability prospects, even if you are applying for entry level Python developer jobs, for example.

Based on the role, candidates are expected to have knowledge in other areas as well, such as version controlling through Git/Github or deploying application using platforms like Docker.

As you can see, cloud technologies like AWS have been mentioned in quite the few job offers too: 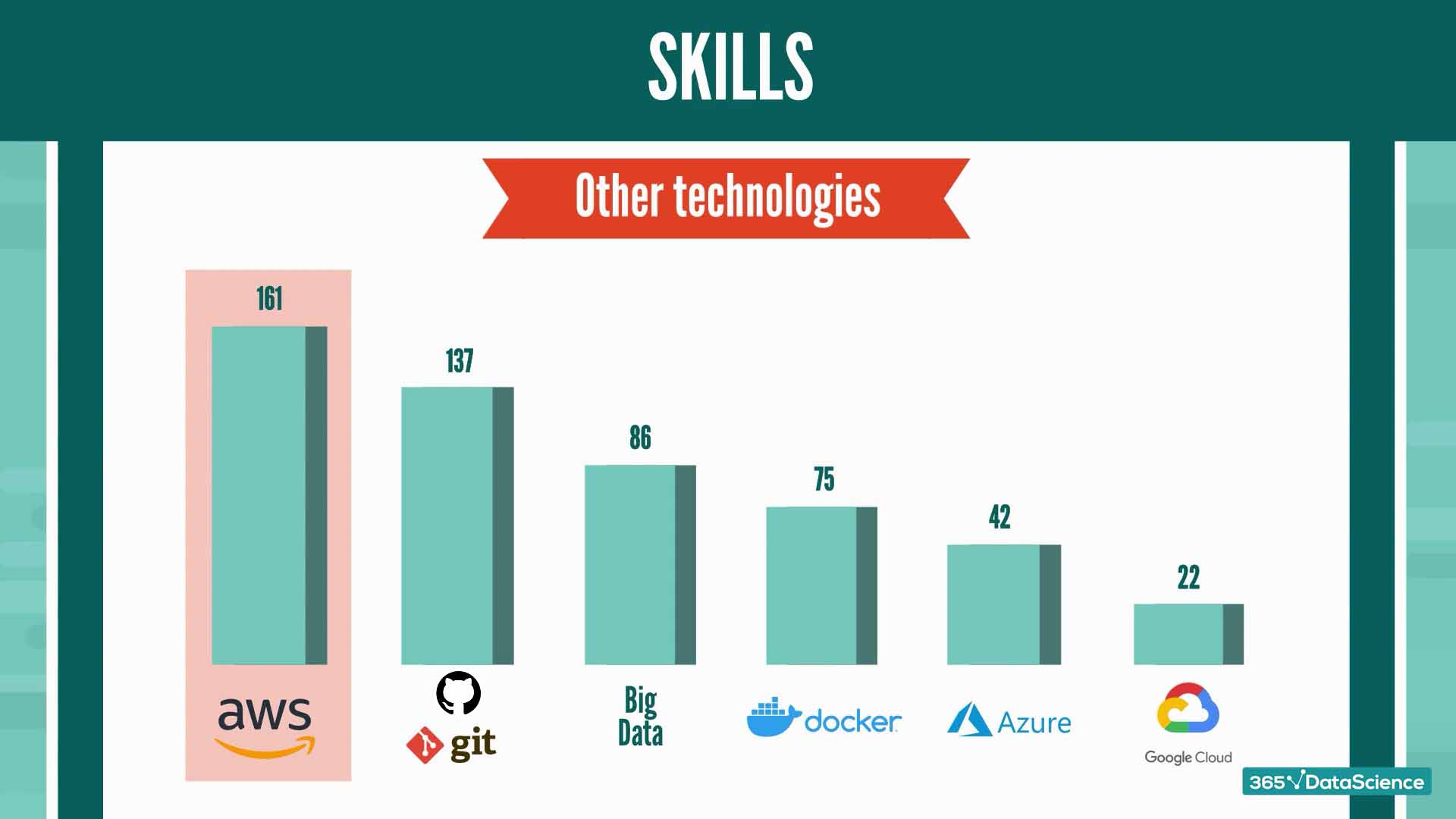 Meanwhile, BigData is required in a good number of Python job descriptions – mostly related to roles like data analysts and data engineers.

Well, while the prevailing result from our sample is negative, communication is still quite important – 477 job roles explicitly require good communication skills. 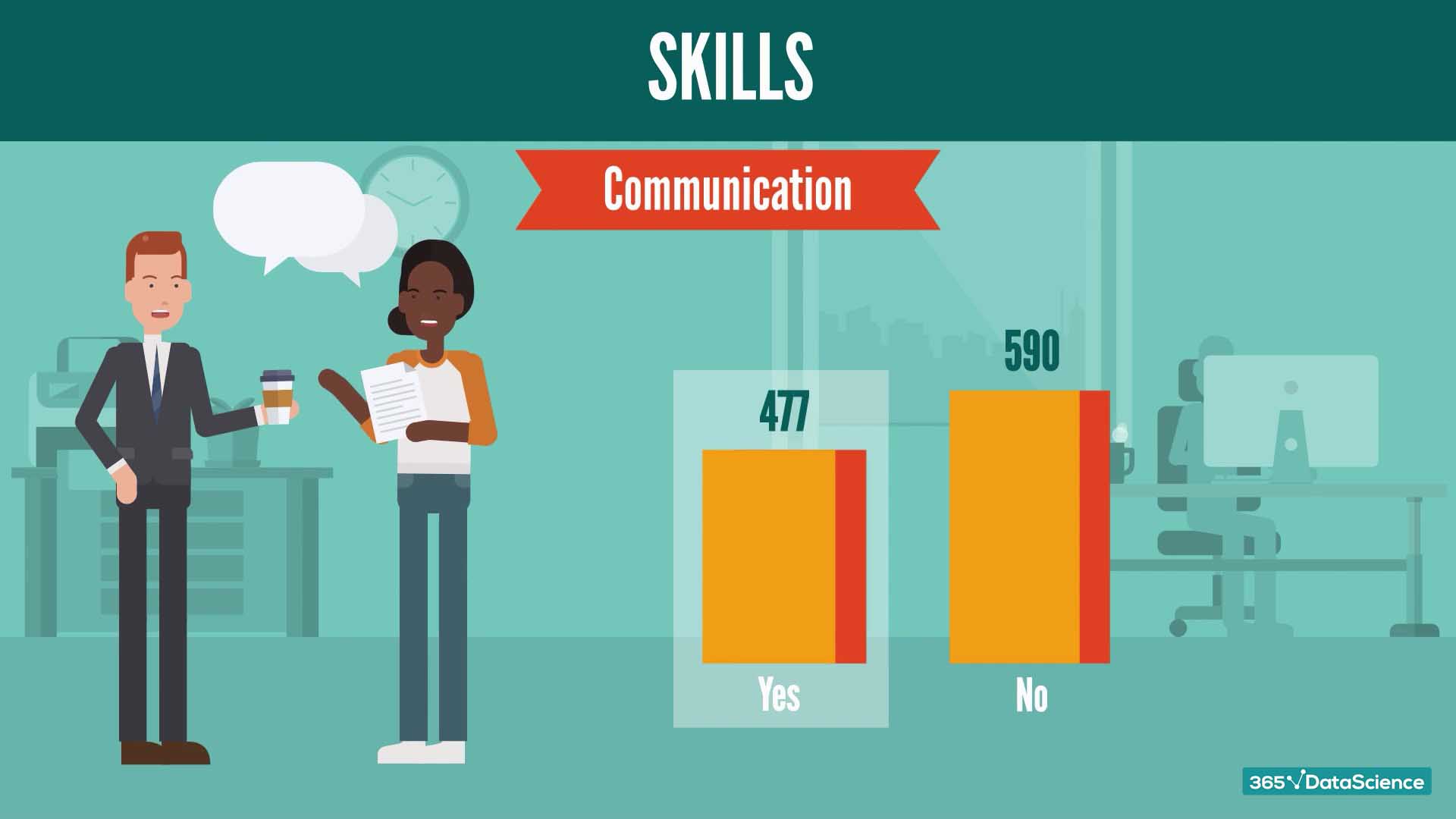 Python Jobs to Pursue in 2021: Next Steps

To sum up, Python is one of the fastest-growing programming languages out there – and is expected to gain even more popularity in the near future.

The main job roles you can apply for with Python in your toolbox are software engineer, data scientist, data analyst and Machine Learning engineer – mostly located in the states of California and New York, as our sample has shown, with plenty of ‘Remote’ roles available as well. One half of the job descriptions require a Bachelor’s degree – majorly in Computer Science, Mathematics and Physics. Most positions require at least 2-3 years of experience and proficiency in at least one more programming language, which is why you should make sure you are constantly updating your skills.

If you’re looking for one single place to master Python, SQL, R, and plenty more in-demand tools – we’ve got you covered! We’ve developed the 365 Data Science Program to help people of all backgrounds make their way into the field of data science. Our instructors have trained more than 900,000 students around the world and are committed to continue offering invaluable lessons for those who want to learn. We have dedicated courses on Python and a collection of its libraries, as well as SQL and R, that will help boost your skillset and employability. 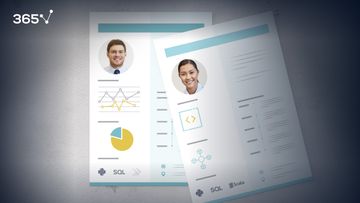 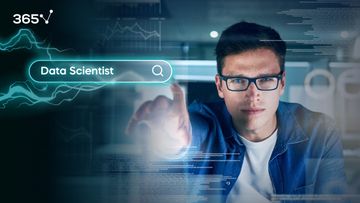 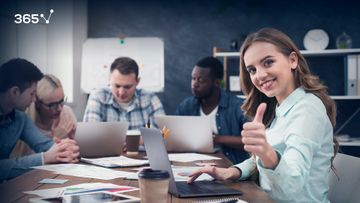 How to Become a Data Scientist with No Experience in 2022? 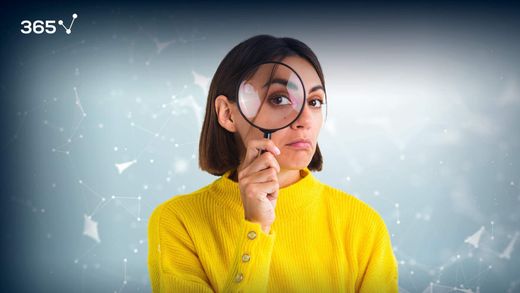 How to Find Great Data Science Jobs in 2022? 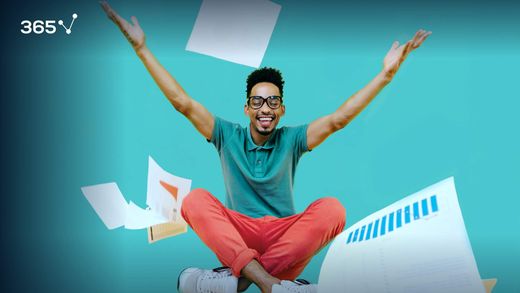 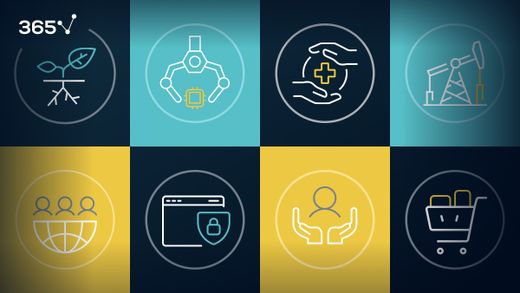 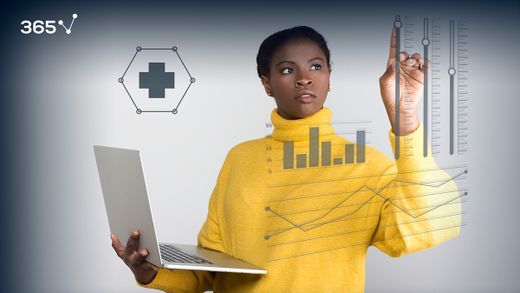 How to Become a Data Scientist in Healthcare?